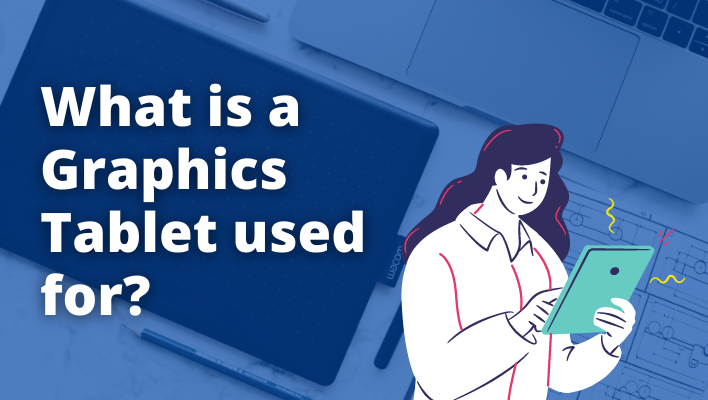 A graphics tablet is used to create digital art using Photoshop, but can also be used with computer aided design (CAD), illustration or even for playing games. It is used as an input device to control the mouse cursor on your computer screen allowing you to use pressure sensitive drawing pens or styluses to recreate real-world drawing and painting materials in a digital form.

It’s hard to be creative when you have to stop and switch between using the mouse and keyboard all the time. It makes everything take longer and takes up precious energy that could be spent on making cool designs!

The solution is a graphics tablet, which allows you to draw directly onto your screen with the stylus pen so you can focus on creating without getting distracted by “mousing around” or switching tools constantly. This type of device has been used by professional artists for years but they are now affordable enough for amateurs like us too!

Do you need a graphics tablet to create digital art?

Graphics tablets are now a must-have item for artists and designers who want to create digital art.

They allow you to apply strokes with a precision that would be impossible on an ordinary computer mouse or keyboard, resulting in less frustration from trying to use those devices like they were meant for drawing instead of clicking!

Drawing on a computer is commonplace these days. However, many people still prefer to use their hands and traditional art supplies like pencils or paints whenever they can for maximum creativity.

For those who miss the feeling of actual drawings when using digital media, graphics tablets are an absolute must-have so that you don’t feel left out in this day and age!

A graphics tablet is used for drawing and painting digitally.

The main reason why people choose the graphics tablet as their input is that it allows them more control over how lines appear on their screen when doing any kind of design work.

This device not only gives users options between using stylus pens versus traditional pencils but also changes depending upon which application you choose while designing digitally.

Have you ever seen a painting or drawing that is so beautiful it seems to jump off the page?

Digital art using a graphics tablet allows artists to draw directly onto their computer screen. With any number of graphics tablets and applications available on today’s market, these creative programs have become increasingly popular with digital art enthusiasts everywhere!

Graphics tablets use a pen that mimics the movement of a brush or pencil on paper.

The pen or stylus is used to draw onto the surface of the graphics tablet and the marks and strokes are replicated onto the screen.

The lines are created as if they were drawn by hand because this tool has been designed for those who create art digitally rather than traditionally such as painting with actual paints onto canvas which takes hours to complete one image whereas drawing digital images using the pen only takes seconds!

You can control the pressure, size, and opacity of your stroke with the pen.

Imagine sketching with a pencil that can change the thickness of its line and erase what you draw.

You can create realistic drawings by layering the pen’s pressure, size and opacity to make your strokes look more like real life.

Using a graphics tablet, you can control three important aspects when drawing:

Each one has its effects on how the stroke looks to reality.

For example, if you want something that resembles watercolour paint with little detail then set it as thin and opaque while using less pressure so the lines are not thick or dark enough for people who really do know what they’re doing but just looking at it from afar might think it was done realistically.

Graphics tablets are not just for editing photos.

A graphics tablet is a computer input device that allows artists to draw frame-by-frame. Some film studios use them because they are great for drawing and animation, while others like their versatility in other professions such as fine arts or graphics design.

These popular devices can be used for anything including animating films, designing architectural models–and even making illustrations look more life-like by using photo editing software specifically made for this purpose!

There are many different types of graphics tablets available.

If you’re looking to create something one-of-a-kind, then the right graphics tablet can help take your idea from concept sketches into reality. These tablets allow for precision drawing or editing of images – and they come in all shapes and sizes depending on what your needs are!

If you want to turn an ordinary photo into artwork that will stand out amongst others, consider using a graphic tablet that allows for precise touch control which helps when creating detailed work with small elements like brush strokes.

There are also tablets designed for 3D modelling where designers use this type of device so their virtual creations look realistic instead of cartoonish.

Some graphics tablets allow you to draw directly onto the screen.

Technology has advanced so quickly that now there are graphics tablets like the Wacom Cintiq range with an attached monitor or ones that connect wirelessly to your computer screen.

Some graphics tablets come equipped with a built-in monitor so you can see what you’re doing when drawing and others allow for wireless connectivity between the tablet and your computer, making it easier than ever before to work on intricate art without needing any additional equipment.