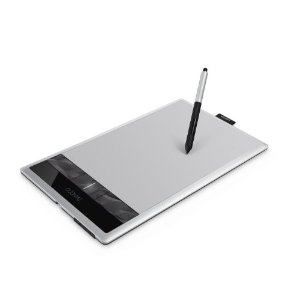 As usual, with a launch of a new Apple product, the press and public are in a frenzy over the shortcomings, failings, benefits and “game changers” that it will deliver. Or not, as the case may be. The iPad is definitely one of those products that fits the Apple ideal. Simple, built for purpose technology that satisfies an exact requirement. I am sure they knew that the iPhone would take off massively once it had been accepted and applications began to start trickling through for it. The iPad will be the same.

EDIT: Wacom have released a series of Bluetooth styluses that offer pressure sensitivity for drawing on iOS applications.  Click here for more information on these cool products.

As part of the Apple iPad keynote, the creator of Brushes, an existing iPhone app, showed what he had achieved working with the iPad. Now, lets just stop a minute and think about his appearance at this famous event. His mere presence at this speech indicates that Apple are considering the creative sector of the market for this new device. The iPad has a very nice, full color screen that can easily be turned into something akin to an interactive pen display, such as the Wacom Cintiq models. Will the iPad open the doors to the device becoming the next graphics tablet of choice for designers, digital artists and standard consumers? Perhaps, but there is one big thing standing in it’s way.

The problem is the way that we interface with the iPad. With a traditional graphics tablet, a wireless pen is used to send pressure sensitive strokes direct to the screen, but the iPad has not capability for pressure sensitive touch. Unless a canny manufacturer creates a pen that works with the iPad and also delivers 1024 levels of sensitivity, then it will not be a perfect match. Drawing with your fingers is just horrible on the iPhone and although there are several styluses and pens available (such as the Pogo Stylus), the psudeo-strokes that software like Brushes creates are far from what you can achieve on a Wacom pad.

With wifi and bluetooth connectivity, the device could be paired with your PC or Mac and allow you to draw directly onto the screen, but apps like Brushes will also allow you to draw direct to a multi layer canvas and then upload to the internet after it is finished. We will only be limited by the creativity of the application developers, rather than the iPad hardware and interface.

Another point that needs addressing would be the lack of quick access buttons and “hot keys” that are on most of the pen tablets you can buy today. I can foresee an app for the iPad that floats out a hotkey selection panel that allows you to change layers or drawing tools, all in the excellent Apple style and glitz. The iPad display is certainly large enough to contain an active area for drawing and a smaller toolbar area where colors can be selected or layers adjusted.

There are many ideas that could propel the iPad to become the next graphics tablet, but also a few considerations that will need to be addressed. After all, who would have thought that people would be able to make such amazing images on just the iPhone.

What do you think? Will the iPad become the next graphics tablet? Let us hear your thoughts in the comment box below.

7 thoughts on “Will The iPad Become The New Graphics Tablet?”