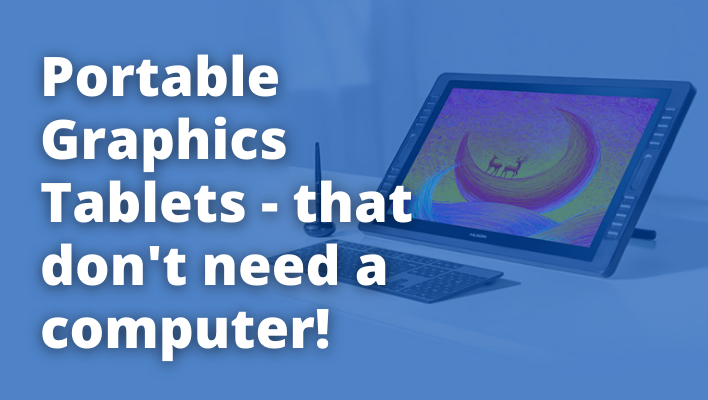 A portable drawing tablet is a device that allows you to draw on the screen just like you would with paper and pencil. You can use it to create digital art, drawings, sketches, paintings or anything else!

It’s an amazing device for artists who want more freedom when creating their work.

However, some people don’t have a computer nearby to connect to, so they need something that doesn’t require one. In this blog post we’re going to be looking at portable standalone drawing tablets that don’t require a computer!

Are there standalone drawing tablets that don’t need a computer?

Yes, the device is called a Pen Computer.

Essentially, they are a laptop with a screen that allows you to draw using a pressure sensitive stylus or pen. The pen computers come in different screen sizes as well as with memory or hard disk size options. It’s a bit like buying a touch screen laptop without the keyboard.

Standalone drawing tablets are often lighter and easier to transport than their desktop equivalents, but they don’t offer as much flexibility in usability.

There aren’t many standalone drawing tablets on the market though.

Most graphics tablets connect to a computer via USB cable. For standalone drawing tablets, the pen display tablet is one option to consider. These connect to an existing laptop or computer and allow you to draw onto a display.

Pen computers offer an active drawing surface that’s similar in size and feel to working on paper with art supplies like paint brushes or chalk pastels. Pen screens are often used for graphic design work because of their high resolution, but they can be expensive.

What about using an iPad Pro? 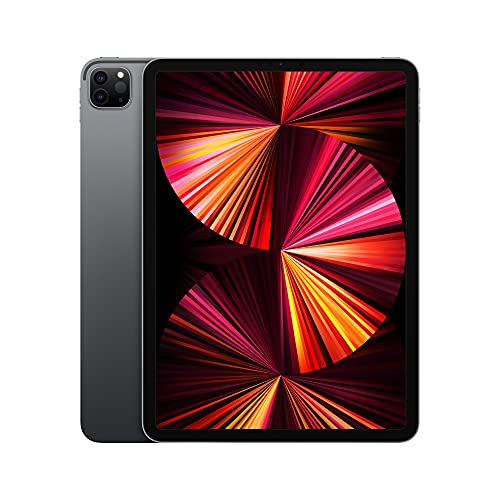 Another option of standalone drawing tablet is an Apple iPad Pro. When you pair this with the Apple Pencil, it becomes a very capable graphics tablet device. Many people are moving to use the Apple iPad Pro with apps like Procreate.

You could always get apps for the Apple iPad and iOS operating system devices that allowed you to draw. However, Procreate has quickly become the standard that everyone is chasing.

Using Procreate with the Apple Pencil allows fine control over the different brushes and effects. You can use it without the Apple Pencil, but you won’t get any pressure sensitivity, tilt options or the quick double-tap to change between drawing and erasing.

The power and speed of the new M1 processor iPad Pro combined with the pressure sensitive Apple Pencil are taking over from graphics tablets and pen displays. I don’t know why they are not used more in professional situations.

After all, a device like the Wacom MobileStudio 16 inch version weighs almost 5 pounds! Compare that to an Apple iPad Pro at 1.5 pounds and you can see the difference a standalone drawing tablet makes.

Even compared to the Wacom Cintiq, I believe that the Apple iPad Pro is the perfect standalone drawing tablet at a fraction of the cost.

Do all drawing tablets need a computer?

The Wacom Intuos Pro is an example of a traditional drawing tablet that can be used with a laptop or desktop. It connects to the computer via USB so you can set up in any location as long as there is an outlet nearby to power the computer. 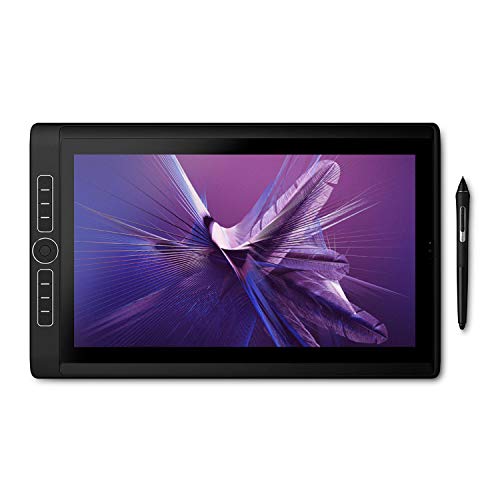 The Wacom Mobile Studio Pro Pen Computer is a totally standalone drawing tablet, designed to work completely free of connections. It comes in 2 different sizes, 13 and 16 inches, both featuring 16 GB of RAM and a 512GB SSD hard drive.

The Wacom Mobile Studio Pro runs Windows 10 and you will need an additional app such as Adobe Photoshop to install on to it to get the best results.

There are a number of ports on the drawing tablet that allow you to connect SD Cards, USB-C cables and the built in battery will allow you to get around 6 hours of use out of it. Once the battery is gone, you can connect it to you computer and use it like a normal Wacom Cintiq.

There is also another model available called the Huion Kamvas Studio 22, which is their first all-in-one graphics tablet. Huion are a well respected brand who make graphics tablets and pen displays at a fraction of the cost of Wacom devices.

Many people prefer their products – not just because of the price. They are as well featured as the Wacom tablets.

The Kamvas Studio 22 all-in-one comes with an Intel i5 processor, up to 240 GB of SSD hard disk and 16 GB of RAM, which is powerful enough to run Windows 10, Photoshop or Illustrator without any issues.

Can you use a Wacom tablet without a computer?

Only the Mobile Studio Pro from Wacom comes with a built-in battery to allow standalone use. It’s also the most expensive option of drawing tablets by Wacom, so only purchase if you need to work without a computer and have plenty of money to spare.

You may find that using a laptop with a Wacom Intuos Pro might be a better option. It just depends on how mobile you need to be and how much space you have.

I can’t really see many benefits for having a Mobile Studio Pro over something like an iPad Pro. For me, the price would be preventative.

Can you use a Huion tablet without a computer?

At present there is only 1 Huion drawing tablet that doesn’t need a computer – the Kamvas Studio 22. This is a cheaper version of the Wacom Mobile Studio Pro, but does have very similar or better specification options.

But there are drawing tablets with wireless capabilities, like the Huion WH1409. You will still need to connect to a computer, but you have more freedom because no wires need to be connected.

But this is just an expensive option for people who want to be able to draw or paint anywhere without needing a laptop. It’s not really important for the Huion drawing tablet to be wireless.

What is the cheapest standalone drawing tablet?

The Huion Kamvas 2 is currently the cheapest standalone pen computer drawing tablet. It does not require a computer to work and it has 8192 levels of pressure sensitivity for drawing, painting and sketching.

What are the pros of using a standalone pen computer?

The benefits of using a pen computer are not always obvious. But there are many other benefits of pen computers that make the purchase worth it for a number of different people.

Here’s what you need to know.

They are fully portable.

They are designed to be used in any environment.

You can use a pen computer in the office, on a plane or at home. They are lightweight and compact so carrying them is no problem. It’s just like taking your laptop with you anywhere you go!

They have express keys and buttons.

Like any good graphics tablet, the pen computers will have several buttons located around the side of the screen. These will allow you to quickly select different tools and options in your digital art software.

This means that you will be able to navigate through your tools as you draw, without reverting to clicking through icons or menus.

It can help you become a more fluent digital artist.

They work with all art and design software.

Because the pressure sensitivity is built in to the pen computer, there should be no worries with it not being compatible with your software.

Although you are probably using Adobe Photoshop and Wacom and Huion has good compatibility with them both. But what if you wanted to use some random art package? Will it work well with your graphics tablet and allow you to access all of the features?

The pen computer allows a convenient way around this. Every pen stroke will be mapped for pressure sensitivity, angle and flow.

What are the drawbacks of using a standalone drawing tablet?

A standalone tablet needs to be charged up in order for it to work properly, whereas using one with a PC means you have almost unlimited drawing time.

For what they are and the benefits they give you, portable drawing tablets can cost a lot of money. Even the smallest Wacom Mobile Studio Pro is nearly $2500. If you compare this to a MacBook Air and a good quality Wacom Intuos tablet, then you will still have nearly $1k left over.

You will need to weigh up the cost of the device compared to how portable you need it to be.

Would a laptop and a Cintiq or Huion Kamvas pen display be a better investment?

Weight can be an issue.

The portable pen computers are also heavy. Their weight makes them less ergonomic for drawing sessions. They also lack a mouse, which means you have to switch between on-screen keyboard commands and touch screen gestures in order to complete tasks.

However, they come with USB ports, so you could connect a keyboard and mouse if you needed to.

A standalone drawing tablet can also be difficult not to use on existing surfaces like table tops or traditional desks because they are only designed with these types of setups in mind.

The stand on the back of the MobileStudio Pro does not look very versatile. I don’t see how you could have it on your lap comfortably. If you are bound to the desk, you might as well buy a cheaper Cintiq Pro model.

You will worry about battery life.

Battery life is also something you will need to consider. Programs like Photoshop can be memory hungry, especially if you are using lots of layers in your drawings.

The battery life of the standalone tablet will have to be powerful enough to last for at least 4 hours of drawing before needing a recharge.

Some of the best standalone drawing tablets, such as the Wacom Mobile Studio have some advanced power management and battery life options where you can adjust the speed of the CPU to save energy.

This means that you will be able to create your digital art for longer between charges if you are not drawing anything too complicated.

There are a few different types of portable drawing tablets you can use, but they’re all expensive. Tablets like the Wacom Mobile Studio Pro and Huion Kamvas Studio 22 are both pricey for something that does not need to hook up to a computer or phone.

However, many artists who have used these devices rave about how much better it is than using their smartphone or tablet because there’s more room to draw on the screen without your hand blocking everything.

If you plan on doing any serious art outside of your home studio then one of these high-tech devices will be worth the investment in time saved from having to lug around a bulky laptop every day. But also look into getting an iPad Pro – you might be surprised at how good they are for creating digital art.