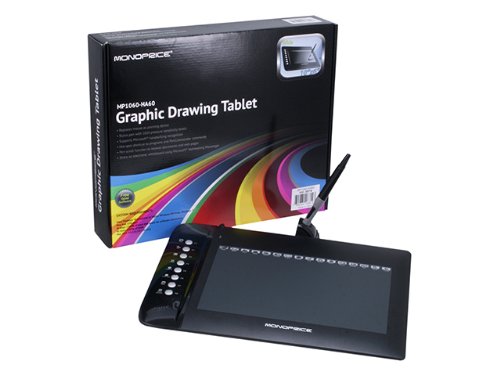 Monoprice MP1060-HA60 Graphic Drawing Tablet
$54.99
Check latest price on Amazon
This graphics tablet from Monoprice is not a new model to the market. In fact, it was launched back in May 2010, but the fact that it may not have the latest and greatest features has not stopped it from being one of the best selling budget graphics tablets on Amazon for the past few years.

Monoprice are a manufacturer of many different electronics type products and this model is just one of a range of tablets they make. So they are experienced with these products which means you should be able to buy a good product from them.

When you stack this model up against similar sized and specified products from Wacom, you understand why this is such a good seller. The price can be up to $300 cheaper than a competing product – so buying this Monoprice tablet might be a bit of a no-brainer, especially if this is your first ever one.

One main point that people look for when buying a graphics tablet is the “Active Area”. This is the part of the tablet that responds to the pen and allows you to draw on the screen.

Some tablets can be quite large, but only have a small area where you are able to work. Luckily, the Monoprice tablet has a 10×6.25 inch active area, with a few extra inches around the site to house the additional buttons and features we will talk about shortly.

This is a very generous size and many consumer reviews highlight that this is a highly valued plus point.

This graphics tablet support Windows, Mac OS X 10.3.5 and later (including Snow Leopard) and Linux too, so you should be able to get it connected to any of your computers in the house. One point to note is that only Windows XP, Vista and 7 is supported. You might have issues if you are using Windows 8 as no drivers have been released at the time of writing this review.

Make sure you follow the installation instructions to the letter though, as some people have had issues with the way it needs to be installed. Ensure you install the CD first, before you plug in the tablet for the first time.

The requirements to run this tablet are also very conservative. You will only need a Pentium 3 processor with 128mb of RAM to operate it. Seeing as most mobile phones come with better specifications than that, these days, you should have no problems unless your PC is very old.

You will also need a free USB port to connect the tablet, which is where the power comes from.

What comes in the box?

Monoprice have included the driver software for your computer (although you may want to go ahead and download the latest version from their website, just in case) and a few software tools that you can use straight away with the graphics tablet.

Unfortunately, the software programs they have provided are fairly basic and there are no bundled copies of Corel Paint, for example. Instead you get Annotation for Word, PenCommander, PenSigner, PenMail and PenNotice, which are utilities for handwriting emails, signing documents or opening programs using the pen. A painting or drawing program would be nice too though.

However, not many people decide to buy a graphics tablet without owning a drawing and painting program first, I don’t think, so this may not be such an issue.

>> Click here to buy this graphics tablet on Amazon <<

Some people might think that this is not a good selling point, but a battery operated pen can make using the tablet much better. The pen has the ability to send the information to the tablet under it’s own steam, rather than relying on magnetic fields. This means that your pen strokes will be more accurate and precise.

Another common measure for how good a graphics tablet is, is the resolution or lines per inch (LPI). This scale tells you how many sensors are in the tablet to track the pen strokes and the higher the number the better. This Monoprice tablet has an LPI rating of 4000, which is more than adequate and is identical to many of the Wacom graphics tablets too.

This measure tells you how many times per second the pen communicates with the tablet to tell it where abouts it is and what it is doing. Most Wacom tablets match this Monoprice tablet at a report rate of 200, which is an excellent demonstration of the power of this budget graphics tablet.

The battery operated pen can detect up to 1024 levels of pressure, so that it knows the difference between you pressing hard or soft. If you have the right drivers installed, your graphics program (Adobe Photoshop for example) will reflect this on the screen with thicker, darker lines or lighter, thinner ones.

Again, the 1024 levels is pretty much the standard these days and is perfect for normal use. You don’t need to go any higher than that unless you are a professional digital artist.

Check out this image that a Monoprice user created to compare the Wacom Bamboo and his budget graphics tablet – very interesting results indeed.  However, I dispute this image as I own a Bamboo Touch and my pen strokes are nothing like the ones he has shown.

For accessing commonly used shortcuts, the Monoprice 10×6.5 tablet has 8 “hot keys” down the left hand side of the device. You can use the software on the CD to program these to open programs, documents or settings. They can be a great help if you are using multiple programs when editing photographs for example.

Along the top of this tablet is a set of 16 icons that, when tapped with the pen, allow you to access common shortcuts. Rather than opening programs, these shortcuts allow you to use copy, paste, save and other menu type commands quickly and easily.

Again, as with the programmable keys, these can be a great time saver so you don’t have to keep swapping from tablet to mouse or to the keyboard.

The position of these buttons is handy and in just the right place, but you might need to get used to not trying to draw on top of them by accident. This is just practise, more than anything, and the large active area will help you avoid this anyway.

The pen is also customisable too, with 3 buttons that can be assigned to various menu items or programs. For example, you could press a button to swap between using an eraser and your paintbrush, or assign one of the buttons to the undo command.

These options are set within the preferences panel in the software that comes with the Monoprice tablet.

As the Monoprice 10×6.5 inch model comes pretty much self contained, there are not too many accessories available. Unlike Wacom tablets that can opt to use an additional wireless unit or have many different types of pens, the Monoprice just delivers the no frills package that “just works”.

The only thing you may need to purchase is additional AAA batteries for the pen or some extra nibs, as they do wear down over time. However, you will find 5 spare nibs in the box, so this will be a long way off anyway.

The size of this tablet is ideal for drawing in most applications and as it is designed as a widescreen format it will be ideal for most modern computers. You can set it to work for a 3:4 ratio monitor if you wish though.

The shortcut buttons are ideal for accessing common shortcuts and settings. Ideal for helping you concentrate on your digital artwork.

This Monoprice tablet is very responsive and many people have sung its praises for being so accurate and quick to set up and use. The pen has also been praised for being very sensitive.

Works with Most Graphic Art Programs.

Once you have the drivers installed, there are an array of programs that it works with, so you can pretty much pick the one you want to use and start creating.

Although the pen takes an AAA battery to operate, it does last a very long time. Monoprice have succeeded in getting the electronics right so that the battery does not get used too quickly, which was an issue for older models.

If you line up this graphics tablet and compare it to a Wacom model of a similar size and spec, you will find that this is a much cheaper product – but not one that is less capable.

Great as a gift or for beginners.

Due to the low cost, this is an excellent choice for first time graphics tablet users or to be bought as a gift. It is also a great choice for children too as it is easy to use and not too expensive either.

The main gripes over this product seem to be surrounding the build quality of the pen battery housing and issues with the software drivers.

It appears that many people open the box, don’t read the instructions and plug the graphics tablet into their PC expecting it to work without any drivers. If you follow the instructions, you should have no issues at all.

The battery housing in the pen has been described as flimsy and even on the Monoprice support pages, they recommend checking that the battery is fully in place if you are having issues.

The tablet also lacks a touch capability, which is present in the more modern Wacom ranges, but this is not a deal breaker when you look at the price of this device.

Some people also complained about the short USB cable that can restrict how comfortably you will be able to use the tablet. However, this is remedied easily with a USB extension cable or by checking your computer for a port that is more conveniently positioned.

Overall, this tablet gets a 4 out of 5 stars rating from us, mainly due to the excellent range of features and the killer price compared to equally specified Wacom tablets.

Most Amazon reviews for this tablet are favorable with only the issues surrounding the drivers clouding the otherwise glowing reports.

This review about a hot pen is an interesting read though, although it seems isolated.

If you are looking for a budget graphics tablet that does not shirk any features in favor of cost, then this Monoprice 10×6.5 inch graphics tablet is ideal for you. Some people have managed to get this for around $50 on sale, which means that it must be on offer sometimes, so check out the current price.