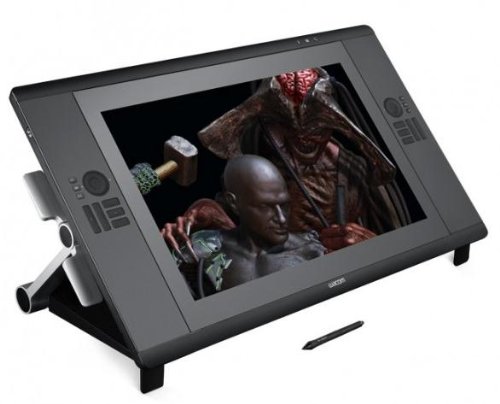 Wacom Cintiq 24HD Touch DTH2400
View on Amazon
The Cintiq range from Wacom is their highest model type, designed for professional animators and digital artists. You might see someone from Pixar using something like this, or someone who does digital images and artwork for a living. Put simply, the Wacom Cintiq 24HD is the best graphics tablet you will ever use – if you can afford it and have  a strong enough workstation to support it!

The benefits of the Wacom Cintiq range of monitor tablets are obvious as soon as you see them. Compared to a normal graphics tablet, which is disconnected from the screen, forcing you to draw with one hand whilst looking up at the monitor (which some people find very odd), the Cintiq allows you to draw directly onto a screen and see the image appear directly under your pen. This is just like drawing or painting directly onto paper, albeit a piece of digital paper. Drawing in this way allows perfect 1:1 interaction with your chosen software and will produce better quality work overall.

At over $3k, the Wacom Cintiq 24HD looks like a 24 inch monitor, mounted on a very sturdy frame that allows it to be placed at any angle on a desk. You get a full 24 inch screen to draw directly on to and 2 panels either side, filled with an array of “ExpressKeys” and quick selection buttons and sliders. There are even selection buttons and sliders on the back of the screen too, for those who think that 10 on the front is not quite enough.

You connect the Wacom Cintiq 24HD to your PC via a supplied VGA to DVI or DVI to DVI cables, so that it acts as a monitor to your PC or Mac, plug in the USB cable and install the relevant drivers. The Wacom Cintiq 24HD then becomes an monitor for your computer that also doubles as a graphics tablet. You can use the supplied pen to interact with the operating system and load Photoshop or your weapon of choice, to start drawing.

Features of the Cintiq 24HD

You can read the user manual here if you want to see more information about how to set up and use the Cintiq 24HD.

Wacom have gone a long way to produce a quality display tablet with the 24HD model. The screen itself, compared to a traditional LCD display, has a soft feel to it, so that the feeling of drawing onto its surface is akin to paper or parchment as much as possible. Once you have discovered your best working angle, you can interact directly with the tablet, something that once you have tried, you will not want to go back from.

The Wacom supplied pen is the usual 2048 pressure sensitive model that also doubles as an eraser once you flip it over and use the other end. Most applications are smart enough to detect this change and they alter their tool selections accordingly. I have not really heard many complaints from people who use Wacom pens and they have a good weight and feel in your hand that is not too alien whilst you are creating.

Overall, the Wacom Cintiq 24HD is pretty much the perfect graphics tablet setup for your computer. Weighing at over 60 pounds, due to the heavy base that allows you to angle and position the display where you want it, the 24HD may not be ideal for everyone, but it is certainly well worth the money.