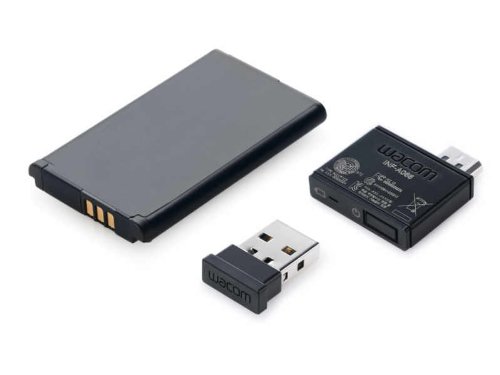 One of the things that I find annoying about using my Wacom Bamboo touch tablet that I got last Christmas is that:

The first 2 points are things that I don’t have too much control over (apart from taking a trip to Ikea and buying a larger table and then getting a larger house to put it in) – but the 3rd point about the cable is one that I find very annoying and restrictive.

Ideally, one of the goals of using a graphics tablet is to be able to lose sight of the fact that you are using a piece of technology to draw and feel that you are not restricted in any way from being creative.

However, the cable getting in the way or being too short is really annoying.

Luckily, Wacom have a solution for those of us who have bought a wired graphics tablet – the Wacom Wireless Accessory Kit. This little inexpensive pack works with most Bamboo and Intuos tablets and frees you from the bind of wires by making the tablet operate over a wireless connection to your computer.

What do you get in the box?

Full instructions are provided on how to use the equipment and the USB dongle that you connect to your computer can also be stored inside the graphics tablet too, so it does not go missing.

How well does it work?

I was a little sceptical that this would not create any lag or stutter when I was using my MacBook. After all, my mouse is Bluetooth and I use the wifi connection to the Internet all the time, so I was expecting some blips here and there.

However, I can report that I have not experienced any drop in connection compared to the wired version. The only thing to note is that it might take around 2-3 seconds for the communication between the 2 devices to be established. After that, its all pain sailing.

This accessory kit is compatible with the following models of Wacom tablets:

Using my Bamboo touch felt a lot more “free” as I was able to sit back more and rest the tablet on my knee, without the problem of the cable tugging or stopping me.

I was able to sit quite far back from the screen too. The documentation says that the connection works up to 10 meters away, but I am not sure many people would use it like that.

It was all very easy to set up and I had no issues getting it to work first time. Some people have reported that they have been unable to establish a connection after pressing the power button. It seems that the fix for this is to unplug and replug the USB dongle, so it is most likely a computer issue rather than a Wacom one.

Battery life is reportedly 10-15 hours (depending on the model of graphics tablet you are using) which should be more than enough for the majority of people. You can recharge the battery you put into the tablet via the cable (that you wanted to get rid of!), so make sure this is handy as you will need it. I guess that some people may run the battery down quicker than others, depending on how you use the tablet.

The drivers for the Wacom products also show you a handy battery monitor in the task bar of your computer, so you will know if you are about to run out of juice in mid-creative flow.

I cannot really think of many bad sides to this product, apart from the fact that it should be included as standard on all models. People may not know what creative freedom you can get using a graphics tablet if they are bothered by wires all over their desk all the time.

Some people on the Amazon reviews page for the Wacom Wireless Accessory Kit have complained that they have experienced drops in connection between their computer and the tablet, which they cannot trace to anything in particular.

Other people have found that the cursor they are controlling with the pen becomes “jittery” and unusable.  Being a bit of a techie, I suspect that this is due to some sort of interference from another wifi or Bluetooth device nearby.

I would assume that if you are already using a wireless keyboard and mouse for your computer without issues, then you should be good to go.

Who should buy this adapter kit?

Due to the low price, this accessory makes a good gift for someone who uses their graphics tablet a lot and might benefit from being less restricted.

I admit that I have become a little lacklustre when thinking of using my graphics tablet recently, but the wireless adapter has breathed some new life into my creative flow.

You can buy the Wacom Wireless Adapter kit direct from Wacom themselves, but I prefer to use Amazon. This is because they have free shipping and a good returns policy.

You might find that the product itself is slightly more expensive on Amazon than Wacom, but you don’t have to pay for shipping, making it cheaper overall.