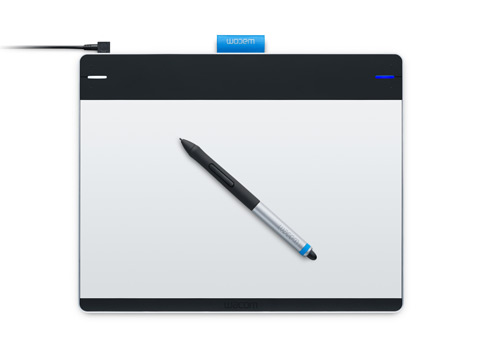 As always, by the time you buy an electronics type product, whether it be a laptop, mobile phone or LCD TV, the newer, better model is only a few weeks away from hitting the shelves. The same goes for Wacom graphics tablets.

Wacom have refreshed their line of Intuos tablets with a new styling and buying options to suit the person who might be interested in jumping into the digital art world, but does not want to spend too much money, but also wants a good quality Wacom product.

The new 2013 Intuos graphics tablets do look very nice with their new design and I suspect that the main guts of the machine are pretty much the same as the previous models – but lets take a look at the hardware specs to see if this is really the case. Are you just buying an older style Wacom Intuos in a nice new package?

The new Intuos comes in 3 different types that have slightly different hardware specifications, although they all look exactly the same. Some people have complained that the texture of the drawing surface is quite coarse and can be a little off-putting but I think this is something you just need to get used to. Without this texture, the physical feeling of drawing on the tablet can get lost, almost feeling like you have less control. You almost need that feedback from the tablet and pen to help you get a better level of control.

This little tablet only has an active area of 6×3.7 inches, so this one is really only designed for occasional use and for people who might want to do some small editing on digital photographs, or sign and annotate documents.

However, the CTH480 has touch capabilities built in, which makes it quite a powerful little device. You can use the touch options to zoom, pan and rotate your document whilst you are working on it (a la iPad) which, unless you have tried it already, makes a hell of a difference to your work. Until I had a touch model, I felt very constricted when painting in Photoshop.

The CTH480 also comes with 4 “application express keys” that allow you to quickly open programs on your computer or access frequently used options within programs. The CTH480 comes with a CD containing the drivers and a handful of software to allow you to get started making digital art. The tablet itself is USB connected (wireless kit optional) and offers 1024 levels of pressure sensitivity.

Essentially, this medium model is exactly the same as the CTH480 – just with a bigger active area and form factor.

In my opinion, if you are really interested in getting a graphics tablet, then go for the largest size you can get as being restrained by the edges of the device when you are wanting to be creative can be a real pain in the neck!

Luckily, the CTH680 gives you enough took to work quite nicely. The entire thing measures 10.8×8.8 inches, with the active area being 8.5×5.3 inches, which is the perfect size for people who want to migrate from paper to digital.

You also get a code to download copies of Adobe Photoshop Elements, Autodesk Sketchbook Express, Corel Painter Lite & Nik Color Efex Pro, which should be enough for anyone to get started.

The CTL480 is now the baby of the new 2013 Intuos lineup from Wacom and is the entry level model. Again, with the same styling and 4 application express keys, this tablet has the same active area as the CTH480 model reviewed above, but lacks the touch capability.

The only other major difference is that the pen does not include the eraser end (which I love) so you are losing some more functionality there – but certainly not a deal breaker if all you want the tablet for is to write on documents or do the odd doodle here and there. If you really need quick access to the eraser, use the express keys to map a function.

The CD that comes with the CTL480 has the usual drivers and Wacom software on there (I don’t usually install this stuff as I find it annoying) and there is the option to download copies of Autodesk Sketchbook Express and Art rage 3 Studio from the Internet if you wish.

Pros and Cons of the 2013 Intuos ranges.

As the design and spec of these new models is so close, I have decided to wrap the pros and cons up into one section as they pretty much apply to all of the models.